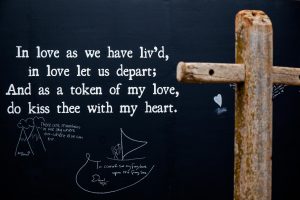 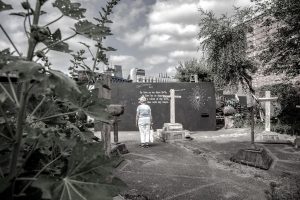 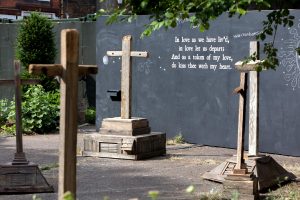 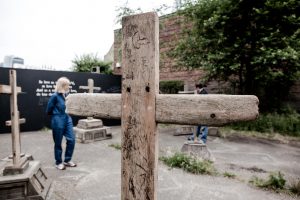 Cross Bones graveyard is a post-medieval burial ground situated in Bankside, Southwark. Bankside was once a notoriously lawless part of London, located outside of the city walls and its jurisdictions. It was a place where the poor resided, home to theatres, brothels and gambling. Established as early as the 17th century, Cross Bones is the final resting place for paupers that were buried at the expense of the parish of St Saviour. The identities of those buried within are largely unknown; there are no distinguishable plots or headstones, but rather a cemented surface surrounded by a community garden created by Bankside Open Spaces Trust in collaboration with the Friends of Crossbones. People were buried at Crossbones en-masse when graveyards were overcharged with the dead and cholera was rife. When, in 1992, an MOLA undertook an archaeological dig of Cross Bones, over 60% of the bodies found were young children and babies. Interestingly, two schools sat adjacent to Cross Bones, while it was an active burial ground.

Requiem for Crossbones : Sound Installation by Emily Peasgood from IIluminate Productions on Vimeo.

Requiem for Cross Bones acts as an interpretation of lives once lived and laid to rest at Cross Bones, reflecting the history of Cross Bones, and the babies, children and adults buried there. Wooden crosses sense the movement of visitors, and trigger sound and music. The sounds of carriages, street traders, children playing and people talking can be heard, imagining how Cross Bones may have sounded when it was an active burial ground. Nursery rhymes, sung by local children from Southwark Cathedral Primary School, contain words and tunes that no longer exist. A short sample of one of the movements that features a soundscape can be heard below.

5 distinct musical movements create individual and group narratives. One visitor can trigger an individual narrative and the presence of many visitors can trigger the full work, which comprises multiple layers. The lyrics for each movement of the work can be downloaded here, with additional notes about each section of the work: [wpdm_package id=’1580′] 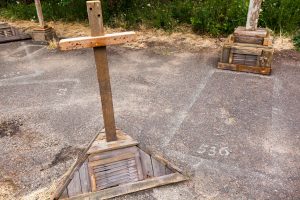 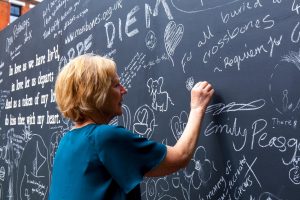 Plots are drawn onto the ground with numbers. At the head of each plot lies a wooden cross, crudely tacked together with pieces of wood, similar to the way in which the coffins found at the 1992 MOLA archaeological dig were constructed. A school blackboard / memory wall features a verse from a Broadside Ballad. Broadside Ballads were inexpensive sheets of paper containing long lyrics. They were popular with the working classes. This verse was published near London Bridge, c. 1700s, and likely written by a local man in honour of his deceased wife. Visitors are invited to leave messages for loved ones.

Requiem for Cross Bones is an artwork concerned with remembrance and hope. I like to think that standing still and listening is an act of acknowledgment and respect to the people buried at Cross Bones. It is a communal reflection on history, life, loss and love. 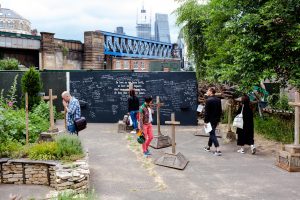 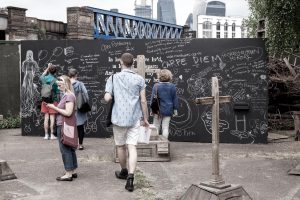 With special thanks to:

Friends of Cross Bones Graveyard, and its volunteers

This is an open call for people to create voice re

Check out my new hat. Stolen from King Al. #girlfr

Isolation with the lovely furries <3

And the self employed are saved! <3

This sign in my window is triggering people to spi

Yesterday I spent the day on Folkestone Sunny Sand

Celebratory cup of tea, now that I am Dr Emily Pea

My dogs are mental. I’m trying to do serious wor

Had a lovely time in Rome today! Checked out all t

Lovely Roviano. We are next to the castle, where s

I’m now staying in a medieval town near Rome, ca

Composing a sample of my next work, Beacons (colla

Found a little town called Pereto today, and a chu

Sid Vicious is so cute

Lovely @kt_crunch and Lola Granola, chilling on a