Scrounge on the Farm

As festival season approaches, competitions offering local musicians the chance to perform are on the increase. It might seem harmless enough; a great way to gain exposure and all in all a whole lot of fun, right? But what we need to ask is: why?

Why are prominent festivals who charge big money for big acts eager to recruit little-known bands who can often be seen at the local pub? And do they genuinely want to provide a platform to promote local musicians? 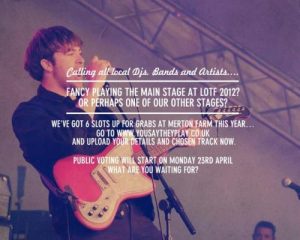 Kent based festival Lounge on the Farm are well known endorsers of the competition method; where most festivals offer one or two performance opportunities to up-and-coming acts, Lounge on the Farm offer six and have even set up glitsy website You Say They Play. Willing participants can register for a band-profile page and are encouraged to ask friends and family to vote for them to play at the festival. But what many don’t realise is that this is less about supporting local talent and more about making money. Why else would they plough money into advertising their competition and designing their glitzy website? Every time a musician asks friends and family to vote for them, they in turn advertise for Lounge on the Farm. Each time they post a band-profile link to their social media sites they do the job of the PR man, for free. And it doesn’t end there. Current Top Rated bands on the site average four members each, totaling 24 possible winners. Should each of those 24 bring one full-paying friend along, at £115 a ticket, the festival make a £2,760 profit. Local bands bring local punters and that’s what I call a highly effective marketing campaign.

As I said before there is a little more to this than meets the eye; several winning bands from 2010s and 2011s You Say We Play competition were not given their performance opportunity as promised. “It was pre determined”, says one musician. “We were third out of six winning bands and they didn’t let us play. We felt bad explaining this to the people who had taken their time to vote for us and when we questioned LOTF about it they were rude and evasive”.

But still this isn’t all: over the past six years Lounge on the Farm has become well known for asking local bands to play at their festival, for free. It’s bit of a bad joke amongst the local music community as most of us have experienced rudeness, disorganisation and exploitation at the hands of their team.

I received ten emails from bands and solo musicians. All confirmed that they had been approached by representatives of the festival and asked to perform. But there was a snag. The festival claimed to not have any funds to pay them with. They did however emphasise that taking part would provide them with great exposure and that they would receive free tickets in payment. How very clever: selling the notion that this is a great deal when really they’re taking advantage of you, gaining free advertising from you, saving and therefore making money off of you and basically pimping you for something you should receive anyway. And at £115 a ticket, I’d rather have the cash thank you. Oh, and by the way, are organisers working for free, to showcase their great organisational skills? What about security staff? Cleaning staff? Bar staff? No? Didn’t think so.

Back in 2006 when I was involved with them, it was common knowledge that local musicians were unpaid, myself included. But we were keen to be involved because we were excited at the prospect of a good local music festival, believed in what they were creating and wanted to be a part of it. Sadly, our enthusiasm was short lived. We were not at all well looked after during our involvement and were not thanked for our participation in the festival. I left with a sour taste in my mouth and the feeling that they felt they had done ME a favour, rather than the other way around.

Over the last six years Lounge on the Farm has grown at a rapid pace. And with their growth one would naturally assume that each and every musician who performed there would be paid. But it seems I am wrong. Of the ten emails I received, two were from musicians who are still owed money from last years festival.

I tried to contact Lounge on the Farm to ask them why they continued their practice of non-payment but they deleted my post from their facebook page. 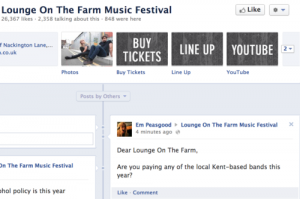 However, later in the day I did manage to enter into conversation with co-organiser Jack Walsh. He declined to comment on why local musicians were still owed money from 2011 but did clarify that they could not pay all of the local musicians.

I do get the impression that in the eyes of Lounge on the Farm, the term local musician holds a cheaper currency. Every musician is local to somewhere and locality plays no part in a musicians worth.

Sometimes musicians chase organisers for gigs, even offering to play for free. And in my opinion, by doing so, musicians devalue themselves and their future earning potential. But this is irrelevant as in this case, it seems Lounge on the Farm are chasing and asking popular local bands to play for free. These bands draw in great audiences and are mostly full time music professionals; how does payment with a free ticket work for those who perform most gig-nights including the Friday, Saturday and Sunday night of the festival? And how is exposure a relevant payment method for those who are already well known? Just how many musicians have benefitted as a direct result of performing at Lounge on the Farm? We all know that real exposure only exists on prime time television but exposure is a word readily bandied around the music industry, designed to tempt any foolhardy young musician.

Lounge on the Farm have always filled a large percentage of their performance rosta with local bands, mostly unpaid, and enough is enough. The locals are getting vocal and many of Kent’s best won’t touch this one with a barge-pole. It’s a shame really; Lounge on the Farm should make it a priority to build relationships with Kent’s many gifted and diverse musicians and not to alienate them.

As my friend Paul says, I put it to you Lounge on the Farm that you use and abuse local talent to fill up your performance rosta at no cost so that you can pay more to the well known bands who won’t step out of their front door for less. And at an estimated £1,000,000 turnover on ticket sales alone, how dare you. 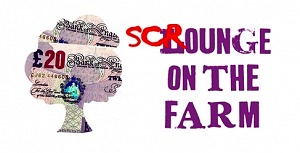 * This blog was originally published on my Public Emilie website. It sparked a large public debate, and was followed up with meetings between the festival, The Musicians’ Union, and myself. To read the original online debate, please scroll down to the comments here.

August 31st 2012: Lounge on the Farm and the Musicians’ Union Statement

September 1st 2012: Lounge on the Farm: The Meeting