Traces of plots that never were…

At Crossbones graveyard, there are no distinguishable plots or grave markers to acknowledge the dead. It is a paupers graveyard. Its occupants had very little, and their funerals were paid for by the parish. These funerals were were very basic, with a plain coffin and little or no ceremony (Brickley, Miles & Stainer, 1999, p. 7). George Downing reported that:

[t]he working people would sell their beds from under them sooner than have any parish funerals: it is heart rending to them (Chadwick, 1843, Quoted in Brickley, et al., 1999, p. 7).

Crossbones is over-crowded, and it is likely that bodies were buried in large open pits that were only closed when they were full. The conditions were poor in the local area, encouraging the spread of disease. This was also the case at Crossbones, where bodies were buried in graves that were too shallow, resulting in the smell of death. In the early 1800s, local residents complained that Crossbones:

is so very full of coffins that it is necessary to bury within two feet of the surface […] the effluvium is so very offensive that we fear the consequences may be very injurious to the surrounding neighbourhood (1832 letter, from a committee established to improve Crossbones, sent to the vestry, quoted in Brickley, et al., 1999, p. 9).

Those buried at Crossbones were poverty-stricken and unequal in life, and death. Following the MOLA archaeological dig in 1992, it was reported that the coffins were poorly and crudely made from thin pieces of wood, likely sourced from the dockyards. 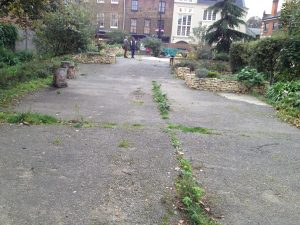 Crossbones: ground surface with weeds and grass growing through.

When I first visited Crossbones, I noticed that the ground is a cement-tarmac mix, with occasional cracks where grass and weeds grow through. This mix of surfaces is, I suspect, due to resurfacing undertaken by Transport for London during The Jubilee Line extension. The site is now a garden, and shrines are placed throughout. Crossbones has a strong identity as a graveyard, but there are no visible graves that show what lies underneath. Crossbones also has a strong identity as a ‘single women’s’, or prostitutes graveyard. However, MOLAS report it is more likely a higher percentage of infants are interred there, particularly from the years leading up to its closure in 1853 (Brickley, et al., 1999, p.25). The lack of graves, and the focus on only the prostitutes that are likely to be buried there, hints at a forgetfulness, or a lack of respect for the lives of the people buried there. I hope that Requiem for Crossbones will represent all interred there-infants, criminals, paupers, and prostitutes-in a way that is respectful, and evocative of memory, loss and acceptance. The way visitors interact with it is an expression of equality. 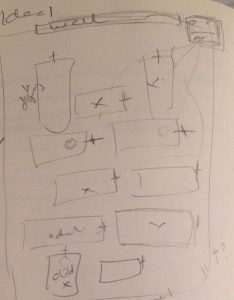 I want the visual element of Requiem for Crossbones to symbolise the individuality of each person buried there. To do this I have decided to represent burial plots that were never really there. My initial idea was to create wooden crosses to place at the foot of plots I would draw onto the ground. I made a brief diagram demonstrate this, with plots in different positions and crosses at the head of each. However, the bodies discovered at the MOLA dig were placed in an east-west alignment, which is common in Christian burials (Roberts and Cox, 2003, p. 22). If I am to visually represent plots, I feel it is important to represent them in a way that is factually correct. However, I feel strongly that the plots should be represented according to my original diagram. If I were to draw my plots in a line, facing east-west, I feel there would be a uniformity that distracts from the individuality I want to create. I do know that during the MOLA dig it was not possible to identify specific plots due to a homogenous soil mix that is common in burial sites in urban poor ground. As such, the edges of burial pits could only be identified by the position of the coffins inside them. I think that by representing the graves individually, and at angles, my concept will be stronger. The individuality of those buried there, en-masse, will be heightened, and I might find a way to visually demonstrate relationships between individuals that would not present in straight lines.

Last Saturday I spent the morning with Gary Perkins, and artist and sculptor with a diverse skill set (who is currently making two pin-ball machines out of materials he found on the beach). He will work with me to represent each plot, visually, and will also create the wooden crosses that stand at their head. We spent a few hours exploring ways to represent each plot, on a similar surface material, with masonry paint. I want to create a traces, and memories of plots that never were. I view this as a sign of respect, and an acknowledgment that each person matters. I don’t like the idea that the money we have can define who we are. I know it does and can, but to allow it to define our worth feels wrong. 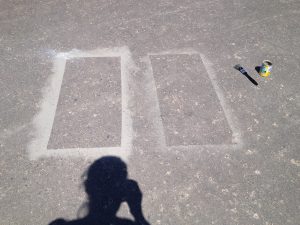 An attempt at using an internal line with a blurred outer marking. The boldness of each might represent time. The example on the left appears more recent than the faded example on the right. If done well, these markings could capture a sense of depth.

Some of our attempts were more successful than others. I didn’t like using a solid boundary line, as it represented a barrier that cannot be entered. In Requiem for Crossbones people can enter the plots, and when they do, some will trigger a soundscape and music-a ceremony that never was. I am currently creating the sound and music and hope to finish by the weekend. All seems to be going well, although I am rushing towards the finish line with little time to spare. I am fortunate to be working with Kate Lynn-Devere, a talented lyricist, and the basic melodies and harmonies are coming together. Requiem for Crossbones will be recorded at a secret location this Sunday! 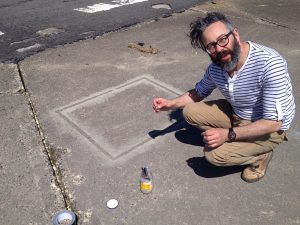 Gary exploring the possibility of defined internal markings, with blurred edges. This might represent the stone borders many 18th and 19th century graves have. 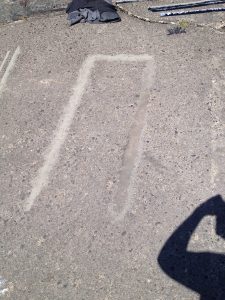 A more successful attempt, on the lower part of right hand line. Masonry paint has been blurred with water to create a water colour effect. I like how the paint seamlessly matches the surface. It looks like a faded memory. 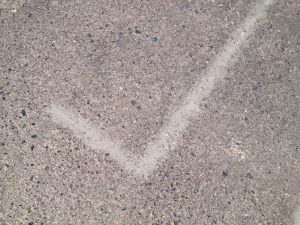 A line with soft edges. 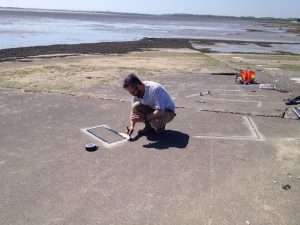 Gary in the process of taping out a small plot. I intend to represent adults, children and babies, and their relationships to each other, through the size and placement of each plot.